I usually exercise 3 times a week & I really look forward to my post workout meals – there’s something really satisfying about enjoying a good meal after some hard training. The meal I look forward to the most is the one after my only morning workout, which is on a Saturday, as I usually have a bit more time to prepare & eat it, so it’s extra special.

I try to keep it pretty simple & it usually comprises of a big hit of protein, some vegetables, something a bit starchy & minimal fat. I’m a bit of a ‘hard gainer’ & have been finding it difficult to bulk up since leaning out after 18 months of long distance running so I’m happy to eat carbs, especially after a workout.

This week I stuck with my usual protein source, which is a nice organic, grass fed rump steak from Laverstoke farm. I’m on reasonably tight budget so it’s not something I eat regularly, once or twice a week usually, so I reserve them for post workout meals. I recently made some of Mark Sisson’s excellent fermented kimchi so that seemed like an easy addition to my plate and as for a bit of extra carbohydrate, what could be better than a nice sweet potato?

I started off by melting some coconut oil in an ovenproof frying pan and frying the sweet potato. I used half a large sweet potato sliced into half inch thick pieces. I had already baked it in the oven the previous evening and once it had cooled down the skin naturally separated from the flesh, enabling me to easily peel it away with my hands.

After a few minutes I added the steak to the pan alongside the sweet potato and fried it for 3 minutes on each side, once it had cooked I moved all the sweet potato to the centre of the pan, placed the steak on top, so all the meaty juices would soak into the potato, and popped the pan into the oven on a medium heat. After 5 minutes in the oven I turned it off & partly opened the door for 10 minutes to let the meat rest. With the addition of the kimchi I had a really nutritious post workout meal, plenty of protein, some digestive enzymes and spice from the kimchi & a bit of carbohydrate too. 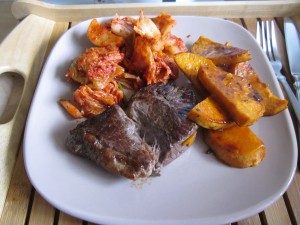